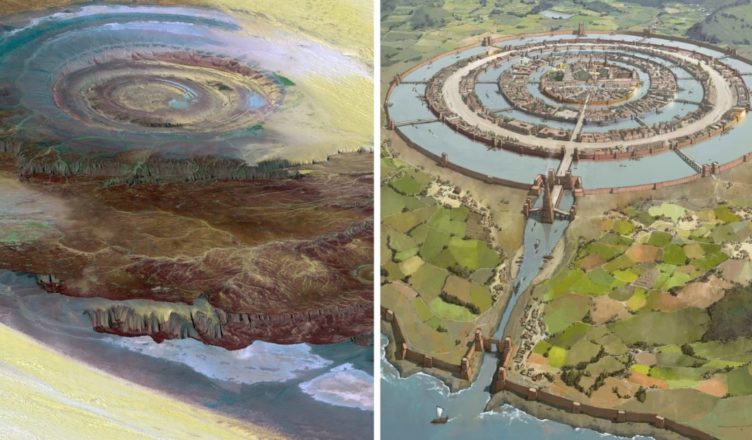 Is there any connection between a strange geological feature in the Mauritanian region of the Sahara desert and the lost metropolis of Atlantis?

If you type “Atlantis” into Google, you’ll get roughly 120 million results. Clearly, Plato’s account of Atlantis has piqued the interest of a wide range of people, from scientists to mystics, with numerous locations identified as prospective sites for this lost and sunken empire. But did such a place ever exist? And, assuming that’s the case, where may the ruins be?

Plato’s Dialogues (about 360 B.C.) is the only historical document that mentions Atlantis by name, and it contains dozens of specific details on what Atlantis looked like and where it would have been placed in respect to other ancient world sites. Many people have been led to believe that Atlantis really did exist because of this amount of detail. 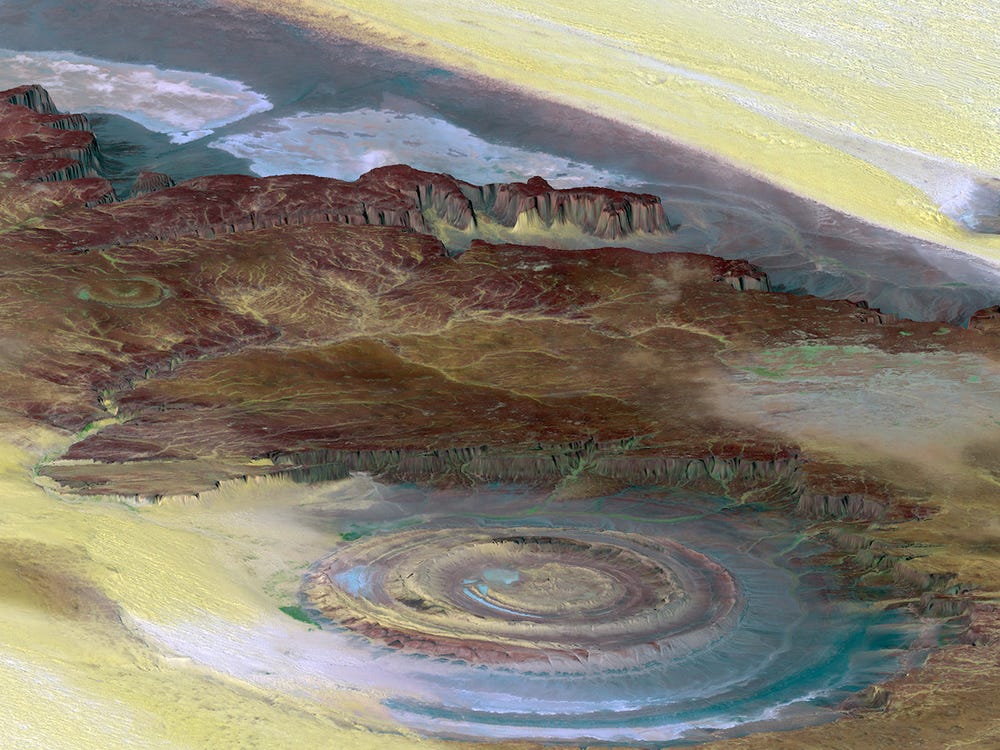 Plato’s description of Atlantis includes a set of concentric circles made of black and red stone around the city, as well as the fact that it was a nautical society:

“Poseidon constructed a palace out of the mountain where his love dwelt, enclosing it in three circular moats ranging in breadth from one to three stadia and divided by rings of land proportionate in size. The Atlanteans then built bridges north of the mountain to connect the island to the rest of the world.

They constructed a vast canal to the sea and carved tunnels into the rings of rock alongside the bridges so that ships could get into the city around the mountain; they carved docks out of the moats’ rock walls. Every entrance to the city was defended by gates and towers, and each ring of the city was enclosed by a wall. The walls were made of red, white, and black sandstone excavated from the moats, and they were clad in brass, tin, and orichalcum, respectively.”

So, according to Plato, Atlantis appeared as follows:

While there is agreement among philologists and classicists about the story’s fictional character, there is still significant debate about what might have inspired it. Plato is known to have freely drawn some of his allegories and metaphors from ancient traditions, leading some academics to suggest that the Egyptian tales of the Thera eruption, the Sea People’s invasion, or the Trojan War inspired Plato’s Atlantis. Others, on the other hand, argue that Plato developed a completely fictional story based on real-life events like the unsuccessful Athenian invasion of Sicily in 415–413 BC or the destruction of Helike in 373 BC. 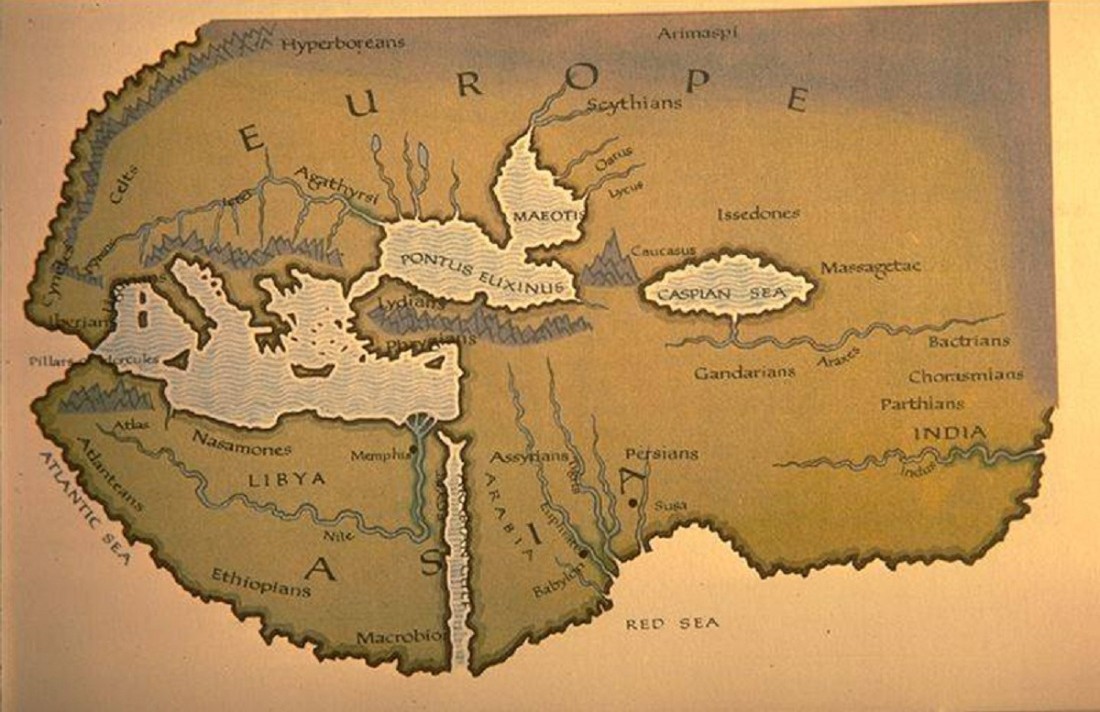 More recently, the YouTube channel Bright Insight stated that the Richat Structure, also known as the Eye of the Sahara, matches Plato’s description of Atlantis in a popular and quite compelling (at least for many) video broadcast in September 2018. The video has over 3.8 million views, and the story has been covered by Der Spiegel in Germany, Tien Phong in Vietnam, Business Insider Australia, and the major UK tabloids, among others.

5 concentric rings, the diameter (127 stadia or 23.5 km – about 14,5 miles), a river outflow to the south, salty groundwater everywhere except below the centerpoint, and mountains with waterfalls to the city’s north, according to Bright Insight. Regarding the structure’s current location – elevated and away from any body of water – the YouTube channel noted that lakes and rivers formerly existed across the Sahara, and that the ground has gradually risen by 2.5 cm (0.8 inch) per year since then.

Is it possible that Bright Inside’s promises are true? Let’s have a look at the facts.

Only when we began sending humans into space did we learn about the intriguing structure. And that’s pretty much all we know about it. Oh, and the fact that scientists are still baffled by it. Oh, and here are a couple more things:

The Richat formation, sometimes known as the Eye of the Sahara, is located in Mauritania’s western Sahara Desert. It’s around 25 kilometers across on the ground.

The Richat Structure was first spotted in the 1930s and was once assumed to be an impact crater. However, research conducted in the 1950s and 1960s has ruled out the likelihood of it being caused by an extraterrestrial impact (such as a meteor) in favor of earthly reasons (such as volcanic activity). Scientists eventually concluded on the notion that it is a 100-million-year-old molten rock dome eroded and molded by wind and water. 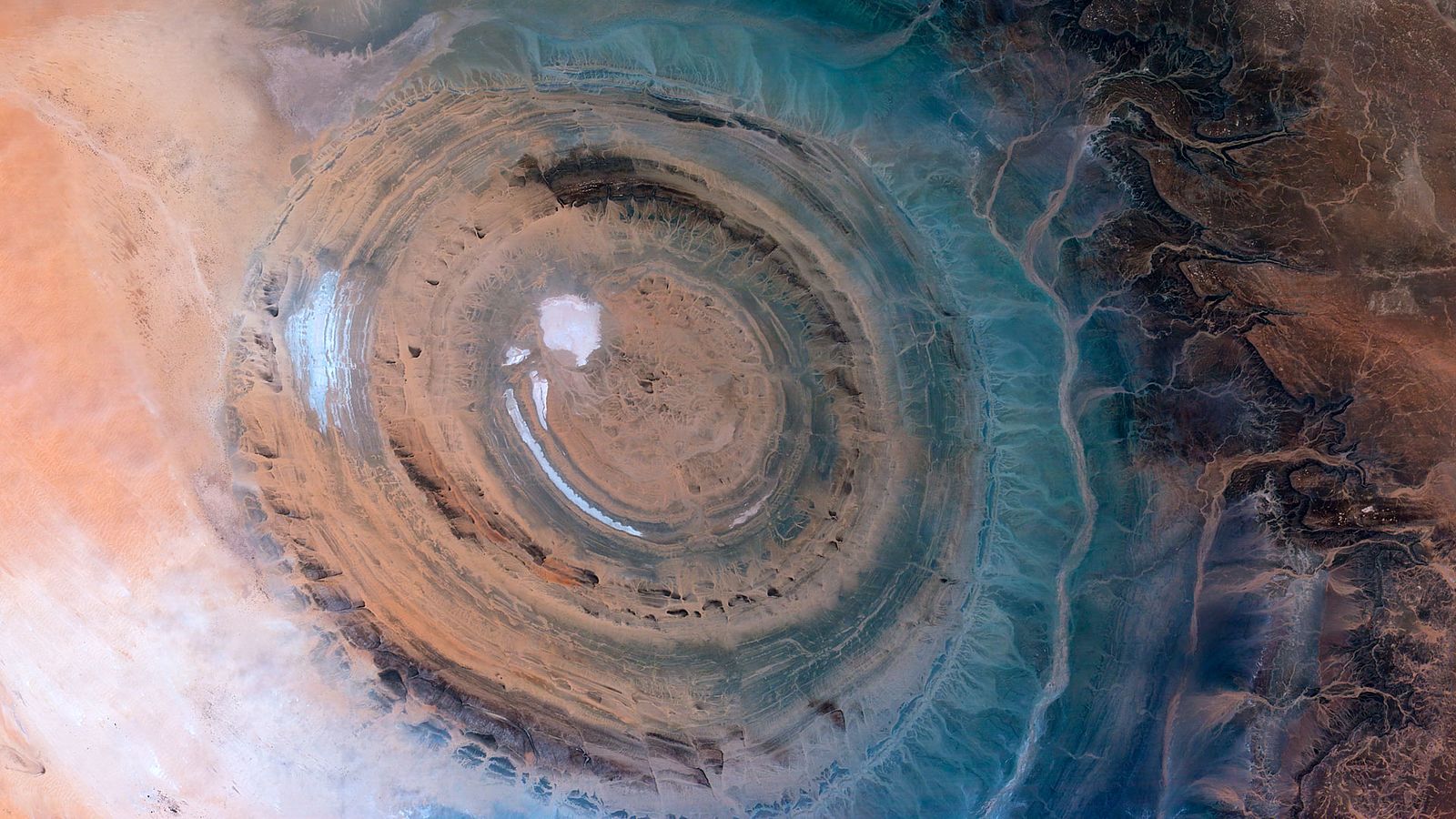 Even Bright Insight now acknowledges that the Eye of the Sahara is a natural creation, claiming that the Atlantians built their metropolis into it. On the Neoroligica blog, Steven Novela questions this very premise, rebutting Bright’s Insight’s arguments one by one.

The YouTube channel’s main ‘evidence,’ according to which the Richat structure is a series of concentric rings that exactly matches Plato’s description of Atlantis, Novela points out that the truth that both are concentric rings is not at all unlikely, and since the rings are not discrete and incomplete in places, it’s unclear how water would have filled the structure. In addition, instead of the three rings of water predicted by Bright Insight, four rings of water can be seen if you look at the entire structure. Furthermore, there is no indication of the canal described by Plato, which is intended to connect the rings by running through all of the walls to the interior structure.

The size of the Richat building, according to Bright Insight, matches Plato’s description, which translates to around 23 kilometers. But, then, where do you draw the line between the structure’s outer and inner edges? The structure is estimated to be 45 kilometers in length by NASA. That’s a significant difference.

The YouTube channel then discusses the surrounding geography, pointing out that the city was surrounded by flat plains to the north and opened to the Atlantic Ocean to the south. Novela claims that the mountains to the north aren’t exactly a perfect match, and that because the Richat is located in the Sahara, there is desert sand where there aren’t any mountains, but they aren’t plains or encircled. 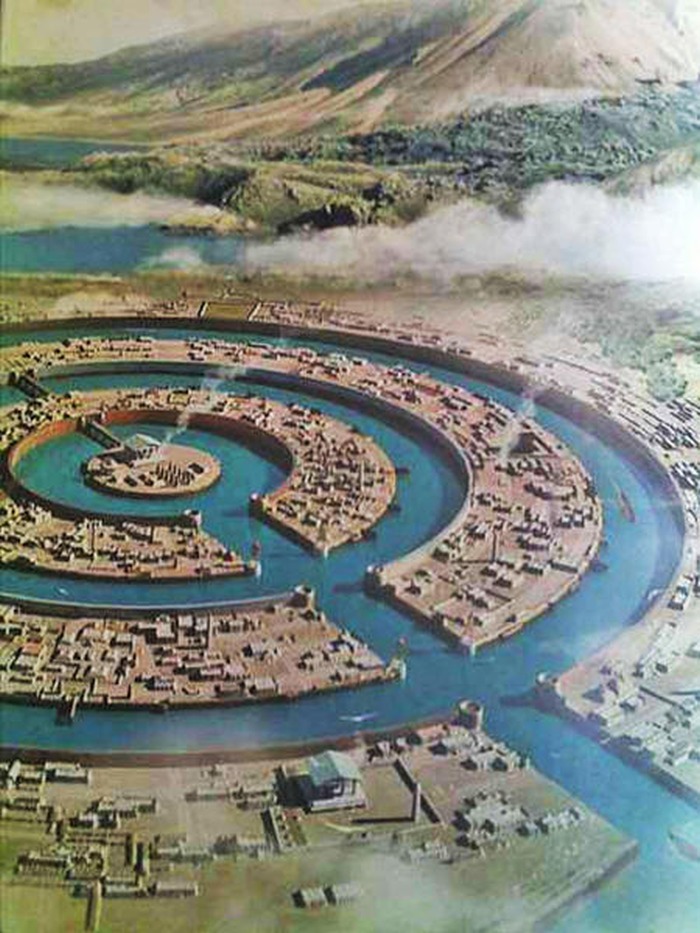 In terms of the ocean’s entrance, Novela points out that the sand flow to the southwest that Bright Insight mentions is actually more to the west than south, as the YouTube channel states. It also has no access to the ocean, which is located to the west.

Bright Insight also asserts that the Atlantic swamped this part of the Sahara 12,000 years ago. That also appears to solve the issue of the Richat not being on an island — or at least it was at the time. It didn’t drown, but it did become landlocked.

The Sahara desert, according to the evidence, is at least several million years old, and there is no evidence that western Africa was submerged thousands of years ago. As a result, the argument looks to be flawed as well.

Many other ‘parallels’ have been cited by supporters of the “Eye of the Sahara = Atlantis” theory, some of which appear to be even more implausible. For example, five-time EMMY Award-winning writer Paul Wagner believes that King Atlas, called King of Atlantis, and namer of the Atlantic Ocean is the same person as Atlas of Mauritania, or that Atlantis is located in the same location as the Eye on Herodotus’s 450 BC map.

The bad news is that Herodotus himself did not create any maps. However, the maps you see on the internet that look like his are neither real nor a fraud. They were created based on Herodotos’ writings thousands of years later to aid modern readers in keeping track of all the persons and geographical things he describes. Mount Atlas is one of these features, and the Atlantes (= people of Mount Atlas) are one of these peoples. However, Herodotos makes no mention of Atlantis. 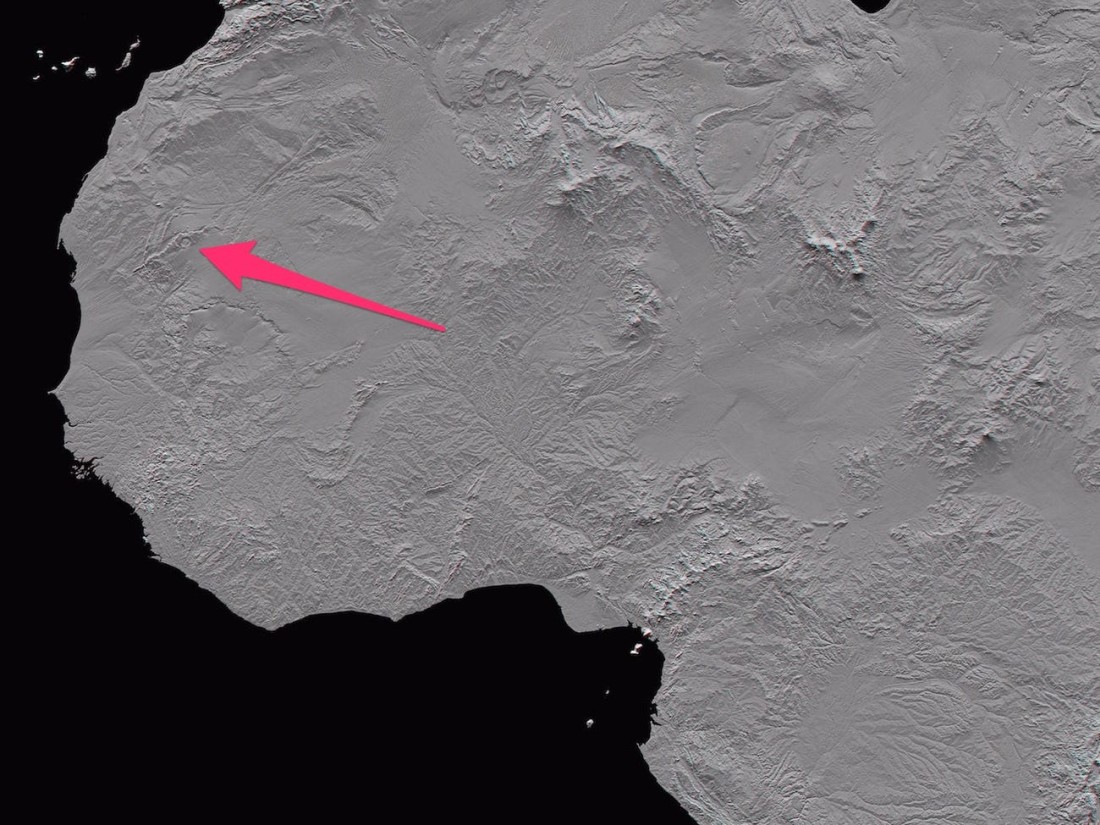 Herodotos did not, in fact, draw his own map.

Thousands of artifacts have been discovered in and around the Richat Structure, according to one of Wagner’s most plausible statements. He claims that the artifacts discovered, which include arrowheads, spears, stone spheres, surfboards, oars, ship hulls, and more, are from the Atlantis era.

Indeed, the Acheulean artifacts – stone tools with unique oval and pear-shaped “hand-axes” associated with Homo erectus, as well as evolved species like Homo heidelbergensis – are found in abundance at the Richat Structure. However, Acheulean technologies emerged at 1.76 million years ago, and while their end date is unknown, they may have lasted until around 130,000 years ago (far earlier than the claimed date of Atlantis’ existence of 12,000 years ago). Furthermore, while many of these artifacts have been discovered on the structure’s outermost depressions, they are frequently absent from its deepest depressions.

So far, no discernible midden deposits or man-made structures have been discovered or reported from the Richat Structure. This suggests that the Richat Structure was only exploited for short-term hunting and stone tool production, and that the apparent abundance of surface artifacts in some areas is the consequence of deflation-induced concentration and mixing through numerous glacial-interglacial cycles. 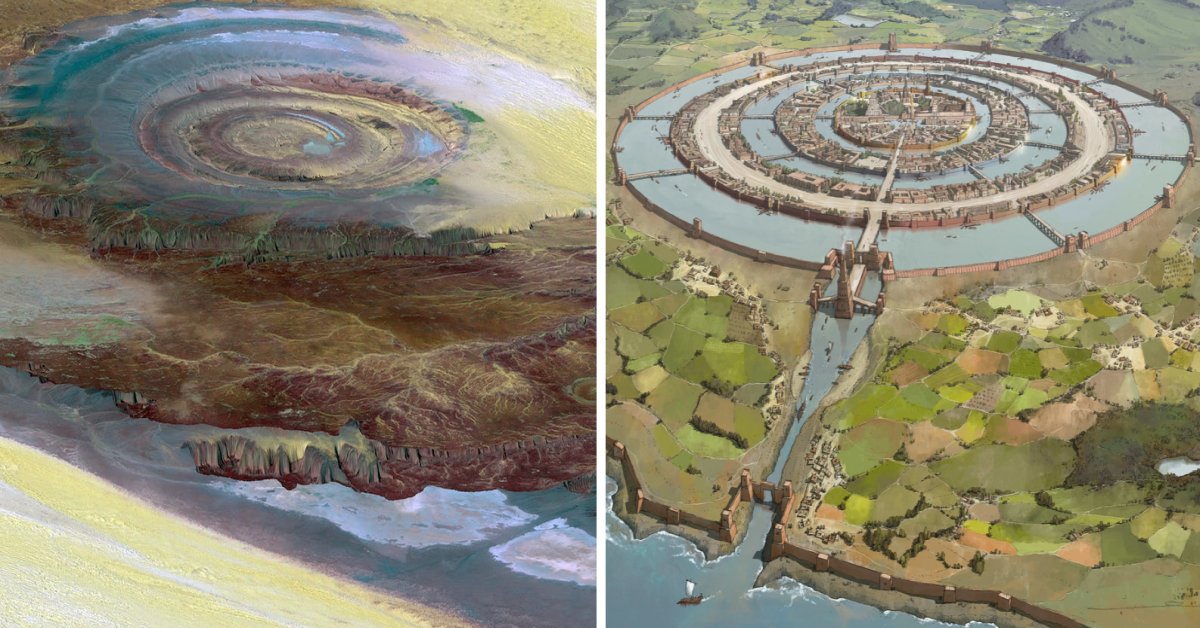 Most crucially, despite Plato’s description of a huge, advanced settlement, there is no archaeological evidence of a city in the Richat structure that existed 12,000 years ago. There aren’t any traces of a city’s worth of antiques, technology, or even a shard of clay pot. There is no trace of engineering, such as physical walls or man-made structures, or any environmental improvements.

It is just impossible for a civilization to construct a complete metropolis and leave nothing behind. So, in our opinion, the geological history revealed by this structure is far more intriguing than the Atlantis theory.