Lim’s mesmerizing close-up card trick won them over in the end, but Darci Lynne Farmer’s performance with her cute senior puppet, “Edna,” who has a crush on Simon Cowell, was one for the record books.

The Champions spin-off had 50 contestants from franchises all over the world, including Got Talent legends like Susan Boyle and Paul Potts. For the show’s two-hour finale, the contestants were narrowed down to just 12.

Darci was voted off the show earlier, but she came back after getting a “wild card” contestant, which is basically a free pass to the finals based on merit. Susan Boyle, who has become a viral sensation, sang the same song she chose for her first audition on “Britain’s Got Talent” ten years ago. To everyone’s surprise, she did not make the cut.

Darci said it was crazy that she made it this far, since she had been voted off before and only stayed because of the wild card. She said, “Getting the wild card and being here, I want this to be the best comeback ever.”

Darci performed with her puppet Edna and Rowlf the Dog from the Muppets. Darci was called “one of the most amazing performers in the history of the show” by the show’s host, Terry Crews. 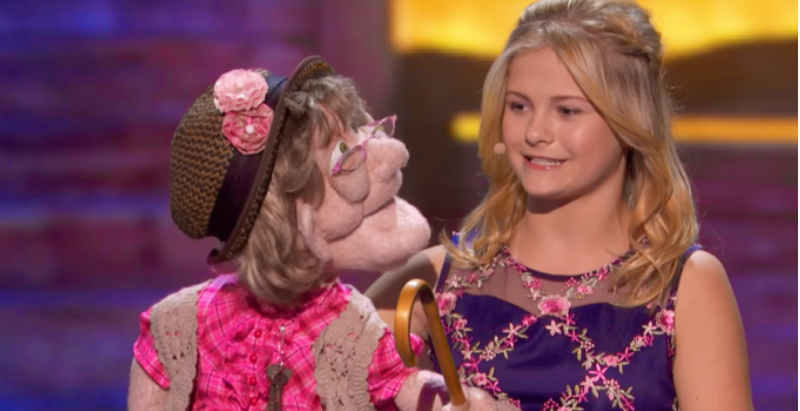 Her older puppet was upset that Simon didn’t call, which led to a performance of “Can’t Smile Without You” by the Carpenters. At the end, Simon kissed Edna and told her, “I really love you. And I apologize for not calling.” Then Darci’s Edna said, “He makes my heart skip a beat. I love you Simon!” Then she passed out. How funny!

Keep a close eye on Darci as you watch the video below. Watch how she changes between her own voice and Edna’s voice while singing and talking with Rowlf. That is either the result of a lot of practice or the skill of a professional child prodigy.