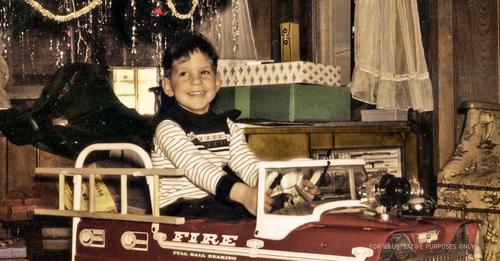 In this old-fashioned story, Jase is a young boy who wants to be a proud firefighter. On Christmas night, little Jase was having a great time driving his toy fire truck around the house. He had no idea that he would have to use it to save his sisters.

In his small American home, where several members of his family lived, Jase wrote letters to Santa Claus weeks before Christmas…

This is Jase. Remember how last Christmas I asked for superpowers? My dad got me a Superman costume, but I didn’t think it was anything special. How about this year you give me superpowers? Then I can save lives like a real superhero. You know, I can be a firefighter! Please give me what I want!”

Jase put the letter under his pillow and went to sleep after writing it. A few days later, he ran down the stairs and saw a huge Christmas tree in the living room and a pile of packages under it.

It was finally Christmas, and Jase stopped looking for his present under the tree.

The excited little boy spent about ten minutes looking through the pile of gifts before he found his.

“Yay! “Gotcha!” he said as he started to take it out of the package.

As soon as Jase saw that it was a firetruck, he couldn’t hold back his joy.

“What’s that? Yay!” He yelled so loudly that his father, who was outside shoveling snow, and his mother, who was in the kitchen, ran into the living room.

“My parents and Santa Claus gave me superpowers! Don’t tell anyone, but I sent him letters and asked him to… and I… I’ll become a firefighter, Mom and Dad! Yes, when I grow up I want to be a firefighter!”

At school, Jase had learned that firefighters were real heroes because they saved people from danger. So the little boy wanted to be a firefighter, and all his favorite toys were related to firefighters.

His mother asked, “Did you like the gift, sweet boy?”

“Well, then, that’s great!” His father added something. “But champ, you woke up your little sisters, so you’ll have to help me calm them down!”

Jase’s family included his twin sisters, Milly and Rosie, his dad, Peter, and his mom, Lydia. They were happy in their cozy, small home, and every party they had was a sweet event.

That Christmas, Jase was so happy with his gift that he drove his toy truck all day. He also took his little sisters for a ride, which they really liked.

Peter told Lydia at Christmas dinner, “I guess it was worth it to save all that money.” “Jase seems to like the truck, and so do the girls.”

Lydia said to her kids as they played with the truck, “Well, darling, we had to do this even though we were on a tight budget.” The kids had already finished eating. “You have no idea how fast they grow up and leave home. Let’s remember these things while we still can.”

Peter kissed his wife on the cheek and said, “Of course.”

After everyone went to bed that night after dinner, Jase got up and drove the truck around the house. He liked it so much that he didn’t even get out of his truck for an hour all day! When he couldn’t fall asleep, he decided to play with his truck in the living room.

As he went down the stairs, he tried not to make a sound. When he got to the living room, he sat in the toy vehicle, grabbed the steering wheel, and started driving it around, imagining how he would do it if he were a real firefighter.

Jase stopped when all of a sudden he felt a strange mix of smoke, heat, and light. When he turned around, the bottom of the Christmas tree was on fire and there was smoke coming from it. Jase’s parents forgot to blow out some candles, which set fire to the back of the tree and the curtains in the living room.

Jase was scared because the fire was spreading quickly. “Mom! Dad! He yelled, “There’s a fire in our house!” as he ran upstairs to wake his twin sisters. Milly woke up and followed him downstairs, but Rosie was still sleeping, so he carried her on his shoulders. He then put his sisters in the truck and ran to Peter and Lydia’s room.

He yelled, “Mom! Dad!” and they were startled awake.

“Jase, what’s wrong?” Mom asked as she turned on the lamps by the bed. “Wait, what is that smoke—”

“Mom, dad, the living room is on fire!” Jase said as he looked back at his parents and then at them.

By that time, more than half of the living room was on fire, so the parents grabbed their kids and ran out of the house.

Peter and Lydia were glad Jase was up and about that night. When they called 911, firefighters came to help. The smoke filled the whole house, and because it was a small, cozy space, the fire spread quickly.

On that day, one of the firefighters patted Jase on the shoulder and said, “Good work, mate!” You did the right thing!

Jase gave him a smile back and said, “Thank you, sir. Not every hero wears a cape. I’ll be a real superhero one day, just like you.”

And now, Jase has saved several families from such terrible events. He is a hero, a firefighter, and he has helped a lot of people. He sometimes thinks about how far he has come and how proud he is of himself.