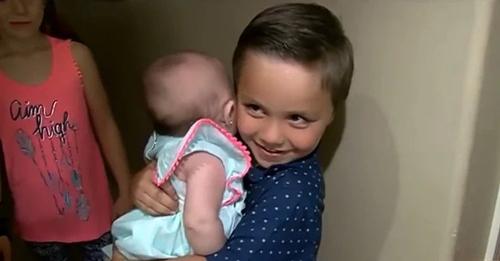 When Salvatore Cicalese was a kid in San Tan Valley, Arizona, he found his mom unconscious in the shower, which is every kid’s worst nightmare.

Sal, age 5, thought the worst would happen, so he wrapped his baby sister in a blanket to make her feel safe and went to the neighbor’s house.

Sal was holding his baby sister when he showed up at Jessica Penoyer’s door. She was home at the time.

Jessica Penoyer is standing outside while she talks to ABC15 Arizona news reporters.

Jessica said, “He’s standing there with something in his hands, and I thought it was a doll.”

She thought at first that Sal was trying to say that “his dog died.” But once she realized how scary it was, she called 911 and told them that Sal thought his mom had died in the shower.

They quickly realized that Sal’s mother had had a seizure and passed out. But if Sal hadn’t asked for help, this story might not have ended well.

On the ABC15 Arizona news, Sal smiles as he holds his baby sister.
YouTube

His mother, Kaitlyn Cicalese, said, “He really saved my life.” “I was standing under the water. I would have drowned if he hadn’t called for help.”

When word got out about Sal’s brave act, the fire department crew that came to his door that day decided to honor him for his bravery, as he deserves!

Watch the video below to see Sal get praised for being a hero, and don’t forget to share.