Angelyne was known as the “Billboard Queen” for a long time… Now, her identity has been discovered… 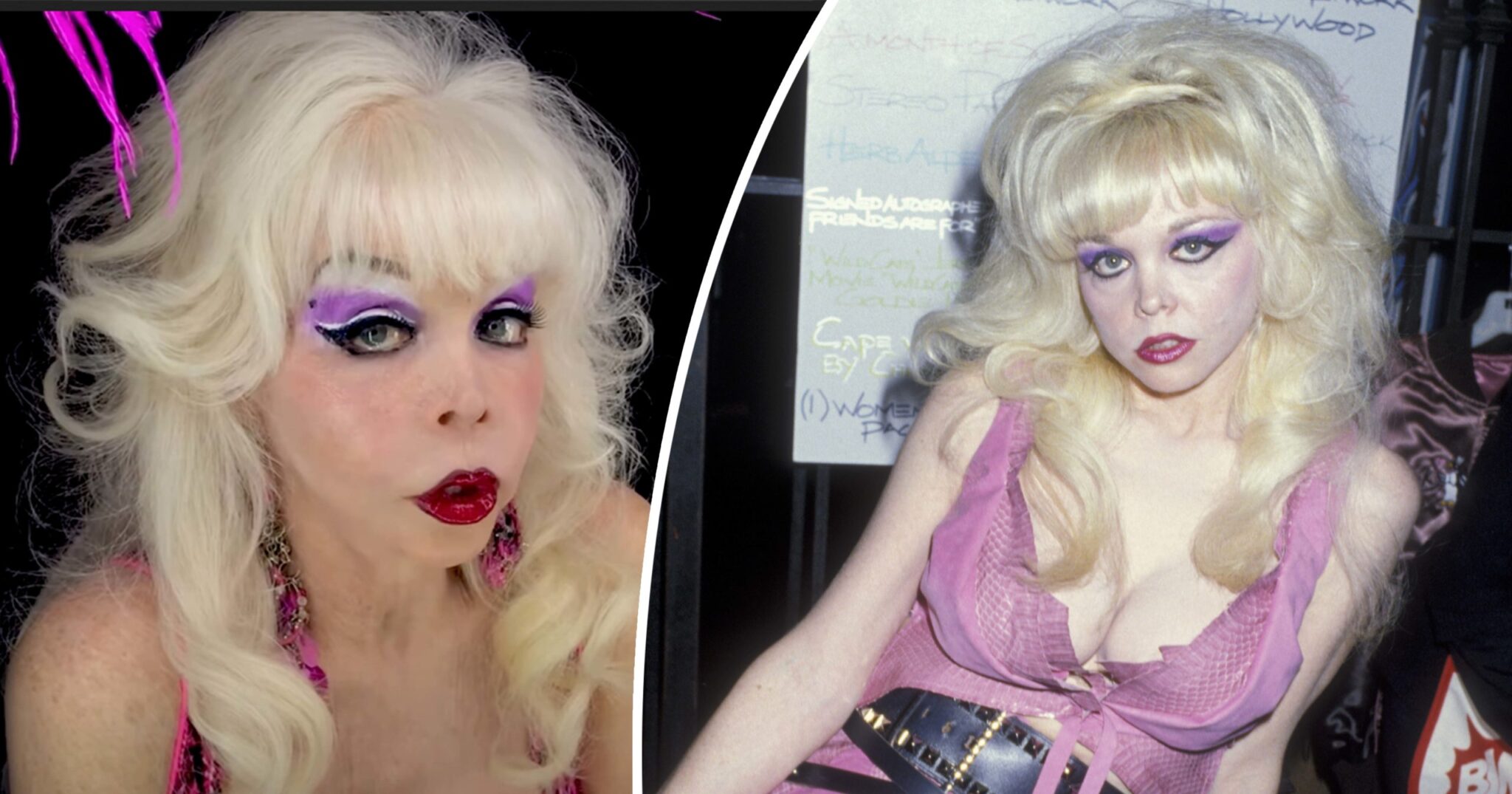 Los Angeles and especially Hollywood, has been known for a long time as a unique city where people fight for fame and money.

Some get through, but others don’t. There are, of course, a lot of ways to become famous, and there are even more people who have done it.

Angelyne is one of these kinds of people. She is also known as the “Billboard Queen.”

In the 1980s, billboards around Los Angeles showed a mysterious woman. She quickly became a Los Angeles icon. Still, a lot about Angelyne’s life and work is still unknown. For decades, people tried to find out who she really was and what her name was.

Now, it looks like the end has finally come.

Angelyne is known as the “Billboard Queen.” This is all you need to know about her.

A lot of people want to be famous. Aspiring singers, actors, dancers, and other performers all want their futures to be bright. Hollywood is the place where that goal is most likely to come true. 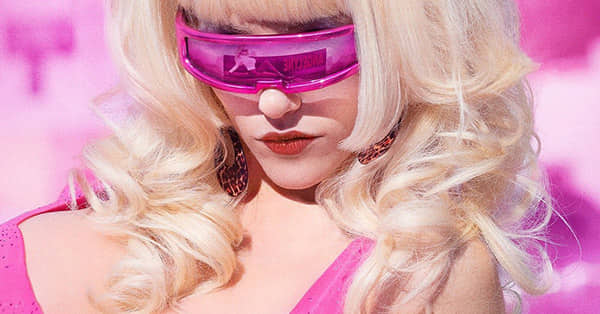 If you want to get to the very top, you have to make a lot of sacrifices and put in a lot of blood, sweat, and tears. In short, to give yourself the best chance, you have to be willing to do anything. Still, a small number of people have become famous in less usual ways.

In the 1980s, one woman was all over the Los Angeles area on billboards. She was called the “bombshell billboard princess” because she was always seen in pink and wore very little clothing.

Between the 1980s and the 2000s, if you went to Los Angeles, you probably saw her face. Angelyne became a legend in Los Angeles, but even now, not many people know who she really is.

There are many stories about her, like that she dated Madonna and talked to Marilyn Monroe through a medium.

So who exactly is Angelyne? And what does she look like today? Here’s everything you need to know about the first “Billboard Queen,” who only sold herself.

A billboard in Los Angeles in February 1984 would change people’s lives for good. On it was a picture of a pretty blonde woman in pink who was pouting and looking out over Sunset Boulevard.

Angelyne, the woman in the picture, didn’t need to do anything else to make waves. It went off in the middle of the night. But how did she even get there?

Well, the story about the famous woman on the billboard is a complicated one. There are a lot of different stories about her, and every year there are more. 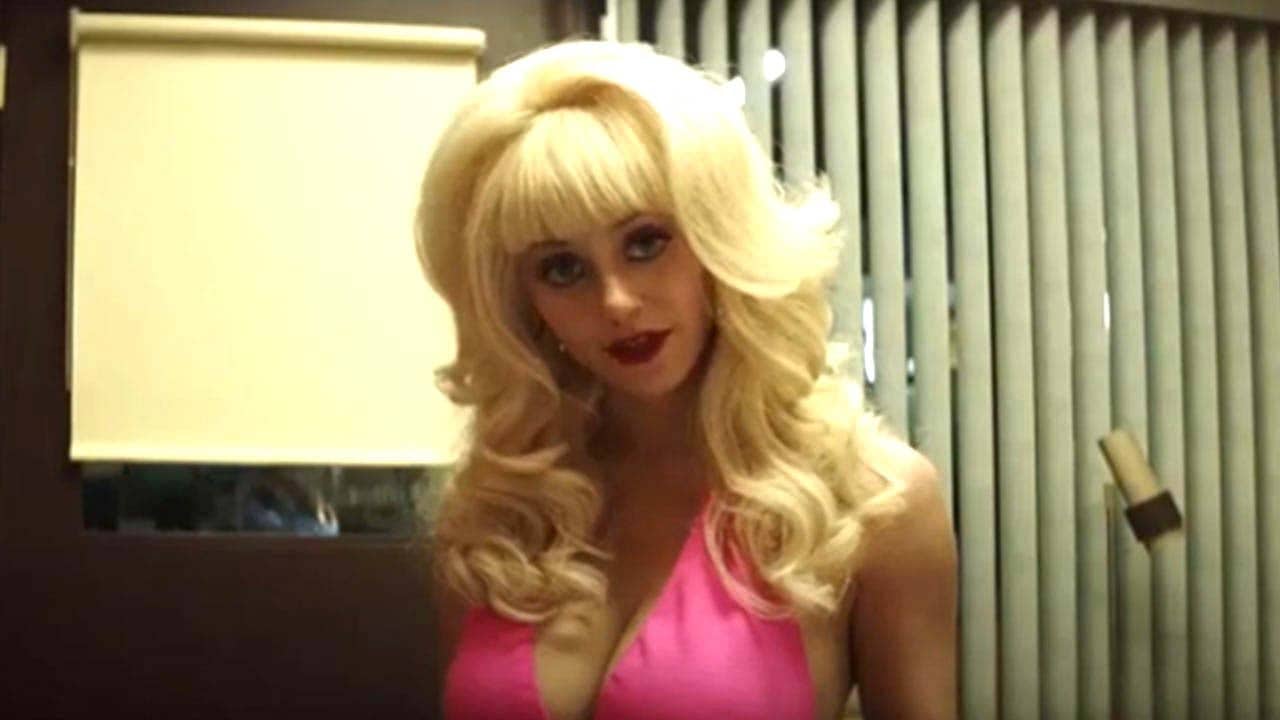 She has also never said what her real name is. Instead, she just goes by Angelyne. With that in mind, it’s not surprising that no one knows much about her life.

In 2001, she told the Los Angeles Times that she was raised by foster parents in Idaho after her parents died when she was young. But this wasn’t really the case.

Angelyne said that as a child, no one paid her any attention, so as an adult, she wanted it.

She said, “I didn’t think they were good parents, and this is where I’m like Marilyn Monroe.” “As a child, she, too, was tossed around.”

Gary Baum of The Hollywood Reporter, on the other hand, told us about a whole new part of Angelyne’s life in 2017. 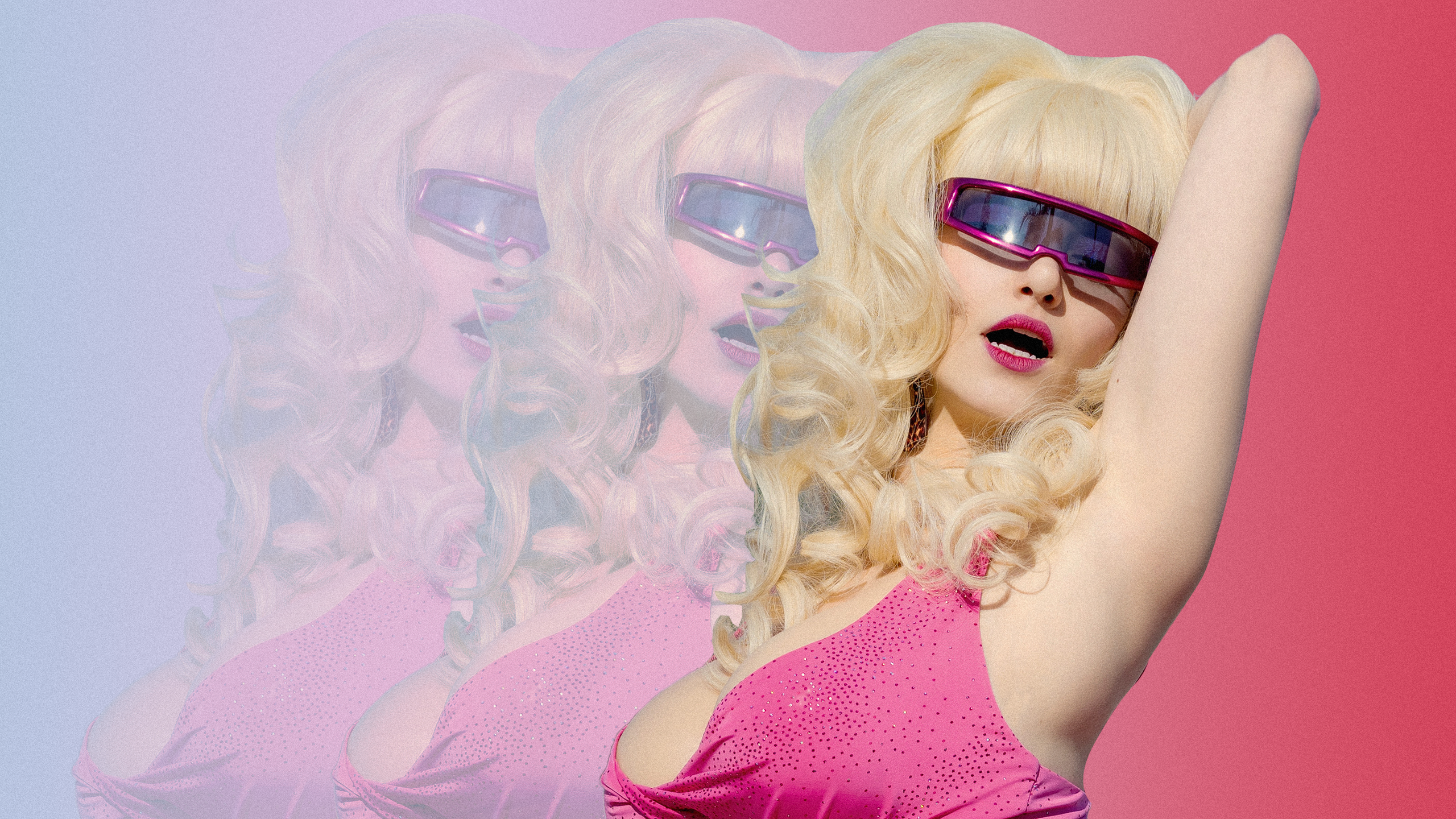 Baum says that Renee Tami Goldberg’s real name is Angelyne and that she was born in Poland on October 2, 1950. She was born to Polish Jews who, during World War II, got out of the Chmielnik Ghetto and moved to Israel.

Based on these facts, we can say that Angelyne is 71 years old today.

She may have lived in Bnei Brak, a community of very strict Hasidic Jews near Tel Aviv, before her family moved to New York. They lived in the Fairfax District of Los Angeles, but when Angelyne was 14 and her mother died, she and her father moved to Panorama City in the San Fernando Valley. The high school she went to was there.

Billboards were up all over Los Angeles.
The Hollywood Reporter also shared some 2016 documents from Ventura County that show part of Angelyne’s name change from Renee Goldberg to Angelyne Llyne.

But is that right? Scott Hening, who has worked with Angelyne and been a close friend for many years, says it’s not.

He told The Hollywood Reporter, “This stuff comes up every few years, and it seems to get more and more ridiculous each time.”

“My favorite was this black woman who weighed 300 pounds and said she was her mother. “I’m your long-lost brother,” or “I’m your twin sister,” he said. It’s just how things are in Hollywood. I’ve never heard of ‘Renee Goldberg.’ It’s funny and crazy at the same time.”

He also said, “I’m not saying the paperwork from the name change isn’t real.” “I’m saying it ain’t her. Look, I get emails from a karate expert in Texas named Scott Hennig. People think I am that person. Angelyne is the name of a lot of girls out there. I’m not sure what to say. And who knows if this old stuff from World War II is still true?”

Her life isn’t just about being on billboards in Los Angeles. There are more stories to tell. She said she was in bands in the LA area, but it looks like they just used her picture to get attention.

“People were interested in me, not the band,” she said in an interview in 1995.

“They looked for me. They started to ask me questions. So, that’s how it went down. It’s what I do. I’m the Queen of the Billboards.”
So, what happened after that first Angelyne billboard went up on Sunset Boulevard? Well, of course, more billboards and more phone numbers. 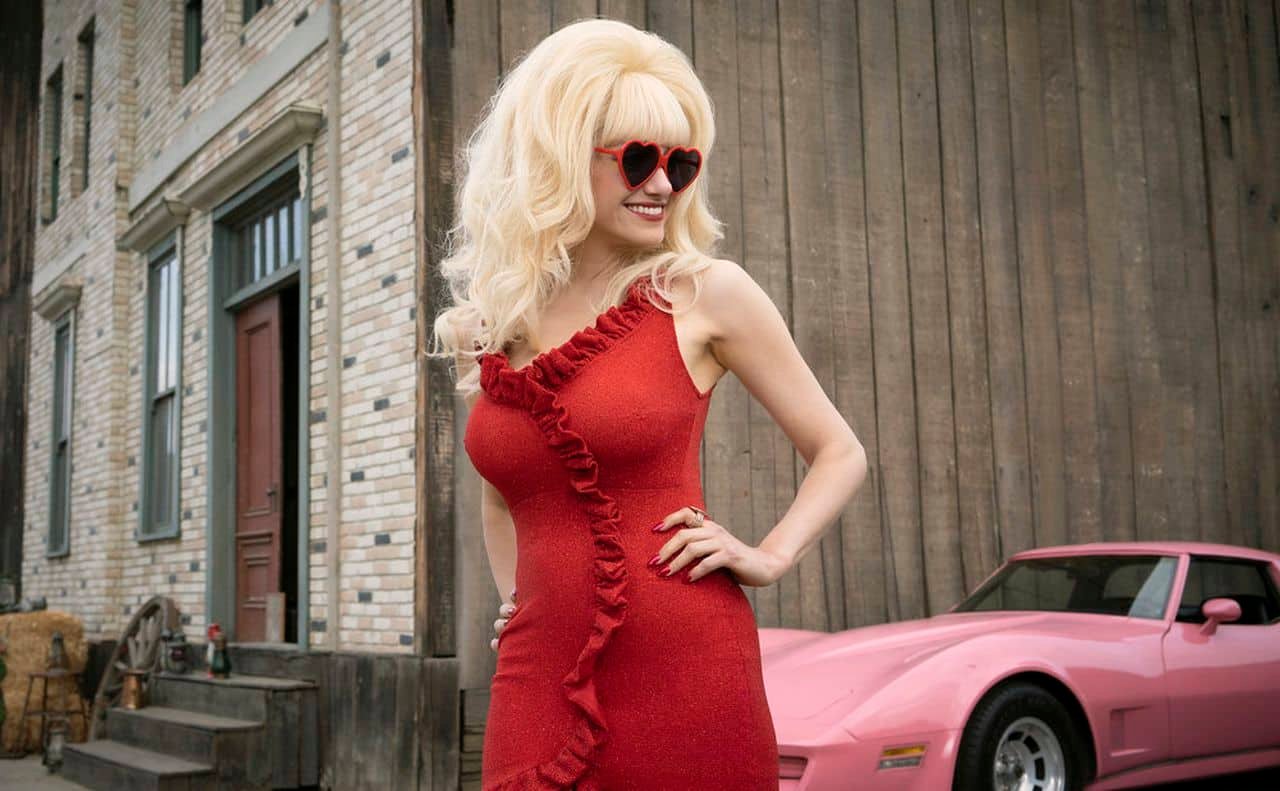 But what did she try to sell? How could someone act? Hire her for a performance? A job with a company, maybe?

“Being huge is normal”
Even now, no one knows for sure, and the mystery around Angelyne is still going strong. One thing is certain: the billboards made her a star right away.

“It was like BOOM! But I think it’s fine to be big. I do well big. I do well at 100ft. “I was born with everything that makes me who I am, no matter where I came from,” Angelyne told The Guardian earlier in May.

It didn’t take long before requests came in “from regular fans, naughty ones, X-rated authors, TV shows, newspapers, and movies.” The talk about her quickly got to a boiling point. Who was she, anyway?

“My husband is a sheikh. Maybe I am a man. Everything was paid for by my husband. Someone who was gay died and gave me all his money. Every two years, a new Angelyne comes out. I’m a prostitute. “I was a puzzle,” she said.

Angelyne became a Los Angeles legend, even though she lived in a city that is always trying to change its name. She drove her pink Corvette around Los Angeles a lot. After the success with the billboard, she went on to work in other fields.

She also said that Angelye would focus on helping the homeless get back on their feet if she were elected governor.

Angelyne told the Los Angeles Times, “When I was 3, I knew I could run the world and do a great job.”

“If not California, why not? Since I’m already Queen of the Universe, being governor won’t be hard for me.”
Celebrity Net Worth says that Angelyne is worth about $500,000 as of right now.

Angelyne, a TV miniseries starring Emmy Rossum as the legendary “Billboard Queen,” came out earlier this year on Peacock Original.
But Angelyne herself didn’t like the series. Angelyne said that she is making her own movie called Angelyne: Billboard Queen. This shows that she wants to tell her whole story. 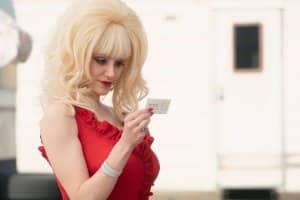 She says it will show what happened to her as a child and how she got to where she is now in Los Angeles.

“I was making plans for a movie, but I wasn’t in a hurry. I have over 100,000 photos and a lot of video. You’re going to love my movie! It’s going to change you. Angelyne told The Guardian, “It’s like The Godfather of movies.”

In the 1980s and 1990s, Angelyne was seen driving around Los Angeles in her pink Corvette. She still does the same thing, and her picture is still on billboards all over the city.
Angelyne will always be a big mystery. But at the same time, not knowing everything there is to know about her is kind of exciting.

Please tell your friends and family about this article if you know her.